In this and the next article, I’ll describe how to pick two springless slider-based locks. In general, these locks work the same way: They have springless sliders on each side of the lock that have one or more cuts (also called gates) for a sidebar to enter them. In order for the sidebar to fit in, the sliders must be moved to a certain height each. Usually, the sliders each have a pin/knob on them that the key can interact with. For this purpose, the key has one or more tracks on its sides. When the key is inserted, the pins of the sliders on each side fit into the track and get moved to the correct height. Don’t worry, this probably gets much clearer with some pictures. For our first lock we’ll use the ASSA Desmo.

The ASSA Desmo is a rather small lock primarily manufactured for the gaming and casino market. Applications might include protection of machines (e.g. slot machines), change banks, cash drawers and so on. Therefore it’s clear that this lock has to provide a high amount of security even though it can’t be very large in size. Furthermore, protection against manipulation of all sorts is probably more important than protection against destructive entry.

For this purpose, the ASSA Desmo uses a total of 8 sliders, 4 on each side. Each side has it’s own sidebar, that means two sidebars in total. There is a great set of pictures showing a gutted Desmo on the keypicking.com board. Note that although the sliders here somewhat look like regular pins, they are not operated by the lower side of the key, but by the tracks on the left and right. 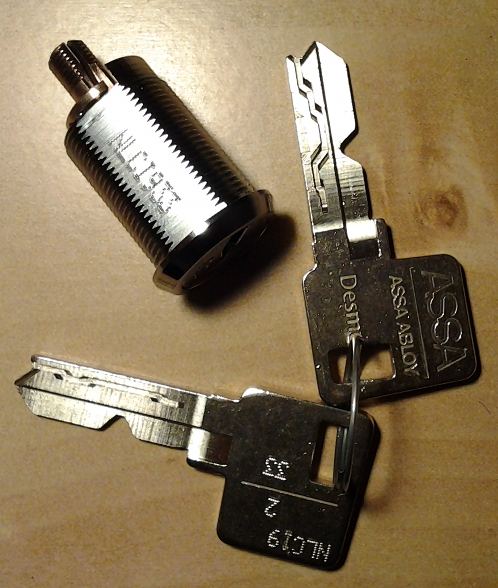 During the first picking attempts, I quickly noticed that picking the lock without being able to see the sliders would be very hard for two reasons:

This is also the reason why some people use cylinders that allow light to enter from the back (e.g. by removing the coupling on a single-sided cylinder). I also used this technique when I first picked the Desmo and I put a lamp behind it in order to see even more. However, it’s clear that this isn’t a very realistic scenario so I was looking for something that could also be applied to a properly installed cylinder.

Let there be light

To solve the light issue, I decided to bring lighting into the cylinder using an optical fiber. So I took a 0.75mm thick fiber out of PMMA (acrylic glass), put it through a cork and attached the cork to my cell phone which has a bright LED. Here’s what it looks like: 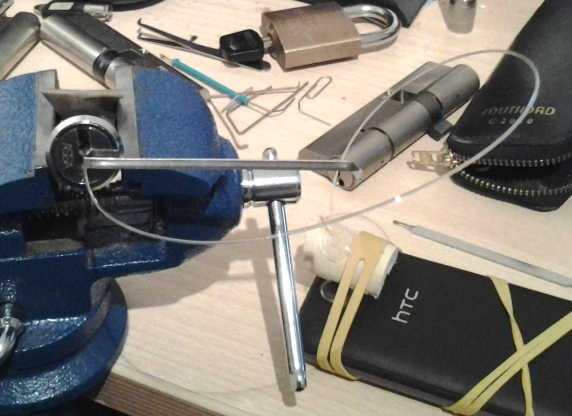 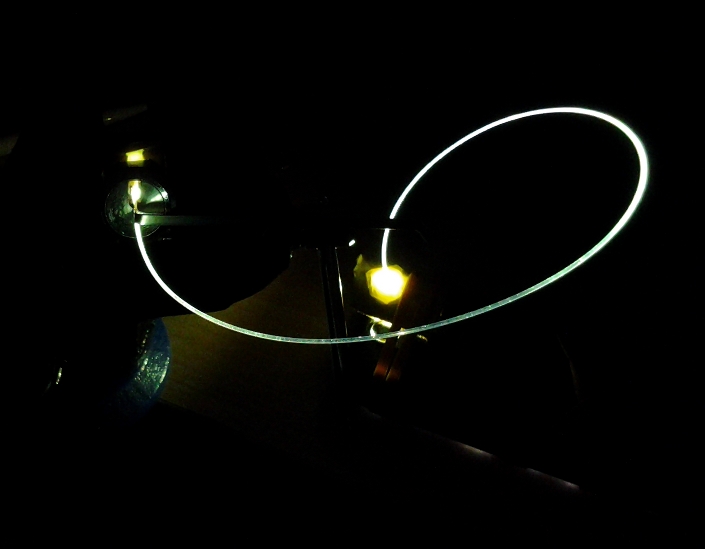 As one can see, the optical fiber is right under the torsion wrench, so it’s not in our way when picking. Now we can take a closer look inside the lock as well: 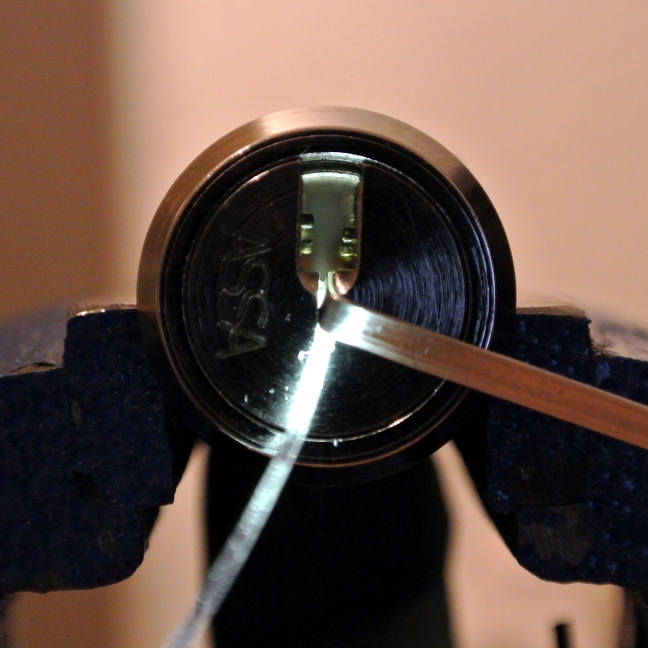 One can clearly see the first four sliders, the other four sliders are behind those. Note that the Desmo is usually open at the end, but I covered the opening with some black paper to take away most light from the back. If we shift our viewpoint a little, we can also see that even the last slider is clearly visible with the light: 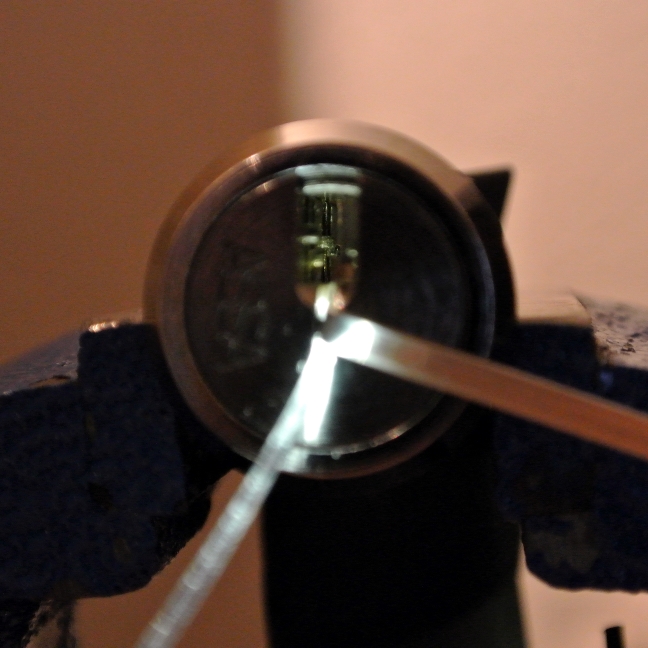 Now that we can see each slider, picking is much easier. I use a (very small) self-made dimple pick, but a half-diamond will likely work as well at least for the Desmo, since the key is quite thick:

To pick, one should start with medium torsion, then search for the binding slider. Once the slider has been located, a ligher torsion should be used while trying to move it. If the slider is not moving (e.g. in a false gate), it helps to almost completely take away torsion and then attempt to move it again. Attempting to move the slider forcefully will usually also work but produce a lot more vibration that can cause other sliders to change their position, so it’s not advisable.

But even when proceeding carefully, sometimes sliders accidentially get moved. Therefore, it can help to memorize the position of the sliders (or writing it down). Furthermore, it’s often the same slider(s) that have to be corrected. When following these instructions, the lock should be open after a while: 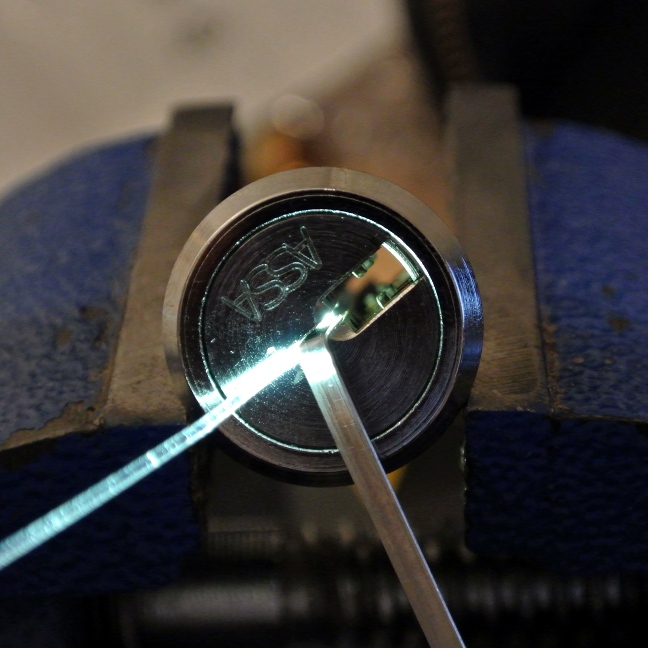 If you liked this article, make sure you also check out the second part, where we’ll take a look at the EVVA 3KS.