In the first part of this article, we discussed the ASSA Desmo which has a limited amount of sliders and a relatively large keyway. With the same methods, we’re going to try to open an EVVA 3KS now.

The EVVA 3KS is a high-security cylinder with 12 sliders, 6 on each side. On each side, there is a sidebar that can enter the sliders if they are properly aligned. Sliders also have false gates that make the picking process harder. The key is much thinner compared to the ASSA Desmo, so there’s much less space for picking as well. Also, there are some sliders with two pins on them and those pins are shorter compared to the one-pin version. This can lead to accidentially touching the larger pins and is also confusing when trying to see the different sliders.

The lockwiki also has an entry for this lock that I recommend to read if you want to know more.

In order to pick the 3KS, we’re going to use the same lighting method that we already used for the ASSA Desmo – a 0.75 mm optical fiber that we place under the torsion wrench. This method provides some amazing insights into the inner of the cylinder: 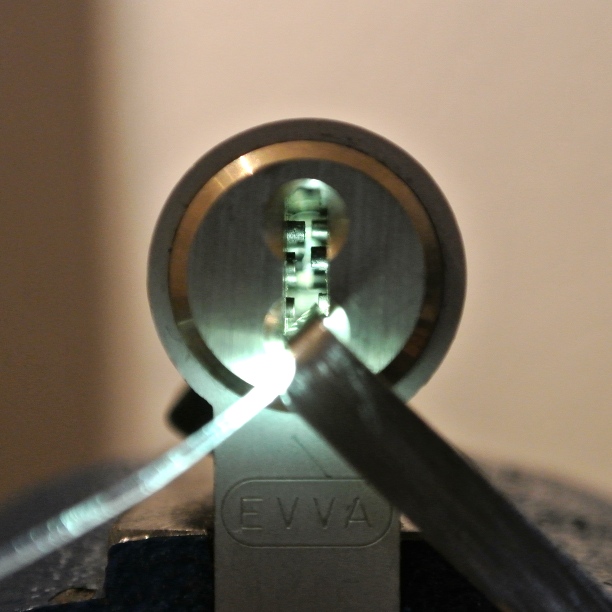 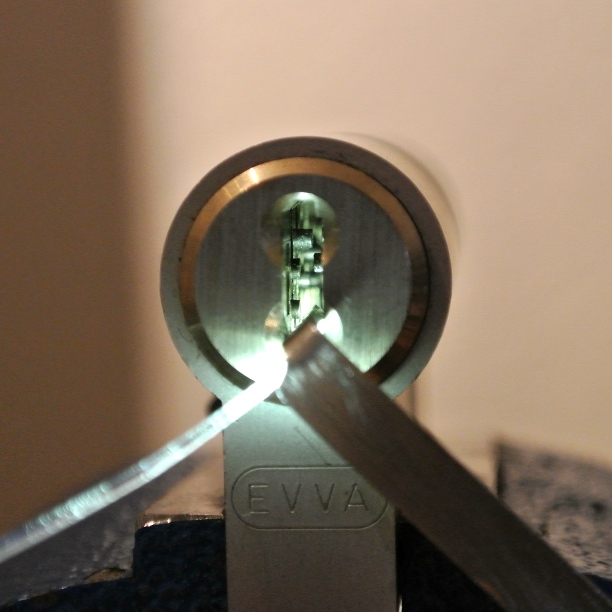 With this view, it’s clear that our chances to pick the 3KS successfully are much higher compared to a blind approach.

For the picking, I used the same tool that I previously used for the Desmo:

The picking process is also very similar: We start searching for the binding slider with a good amount of torque applied. With the sliders being visible, it’s easier to see if a slider moves freely by touching it and slightly trying to push it up and down to see if it moves. Non-binding sliders move even on the lightest touch while a binding slider moves only under force or doesn’t move at all (e.g. in a narrow false gate). Note that the last two sliders can be hard to see/observe even with light, extra care might be required to confirm they are not binding. Once we have identified the binding slider, we put a little pressure on the it and if it doesn’t move, we reduce torque until it does. If this slider is in a false gate, it might even be necessary to temporarily remove all torque.

After setting a slider (most of the time when taking it out of a false gate), other sliders might change their position slightly (drop a little, or get accidentially moved with the pick). If the cylinder was already rotated a few degrees (due to a false gate) and doesn’t return into that position after setting the slider correctly, one must carefully check all the other sliders without accidentially moving them around. Note that even in a fully horizontal position, these sliders usually don’t immediately fall down due to gravity, as one would expect. However, vibrations and other impact on the cylinder can make this happen easily, so too much force is usually a bad idea.

One last trivial but important thing is the position of the torsion wrench. If you put the torsion french into the cylinder, make sure you are not blocking the two sidebars which also “grab” the key at the entrance of the cylinder (on the left and right, the sidebars will enter the keyway to hold the key while rotating).

As someone donated 3 EVVA 3KS double cylinders to me (thanks again!), one with a key, two without a key, I had plenty of time to test this method. I opened two of them on the same day I got them

and also reopened one of them in a fully horizontal position to confirm that it still works. As I mentioned already, the sliders don’t fall down even in this position. Retak from the Koksa community suggests that this is due to some special grease being used in these cylinders. I think it’s also due to the friction and the force required to overcome it being larger than gravity (as the same effect can be seen in the ASSA Desmo). Probably both factors contribute to this behavior.