While I was on a business trip in London, I couldn’t resist going to a hardware store and buying some UK lock to satisfy my collector instinct. I was surprised to find a lock that claims to protect against many of the commonly known threats at once (including picking and bumping) while also being extraordinarily cheap: The UAP+ ZeroLift Cylinder.

So here’s the packaging of the cylinder 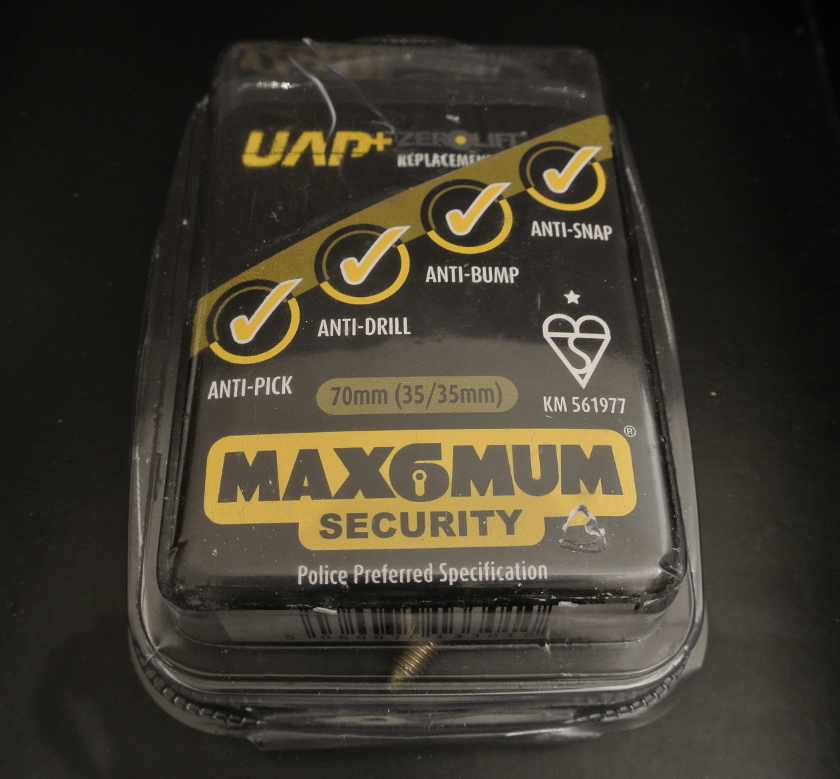 which already makes some serious claims:

It should be noted that “Anti-“ in this case does not mean that the lock is immune to this kind of attack. Instead the manufacturer meant to say that the lock is resistant to these attacks, making them harder to carry out, compared to usual cylinders. I’ve watched one of UAP’s advertising videos and they use the term resistant themselves, it’s just not clarified on the packaging. However, for the purpose of the lock (regular burglary protection), providing resistance against these attacks is all that is required.

Since I’m a lock picker, I tried to hand pick the lock first. And indeed, it provided a fair amount of resistance: It took me around 8 minutes to open it for the first time. The lock felt a little weird to pick overall and seemed to have some extreme spools in it. So I went on to disassemble it and figure out what kind of pins were used: 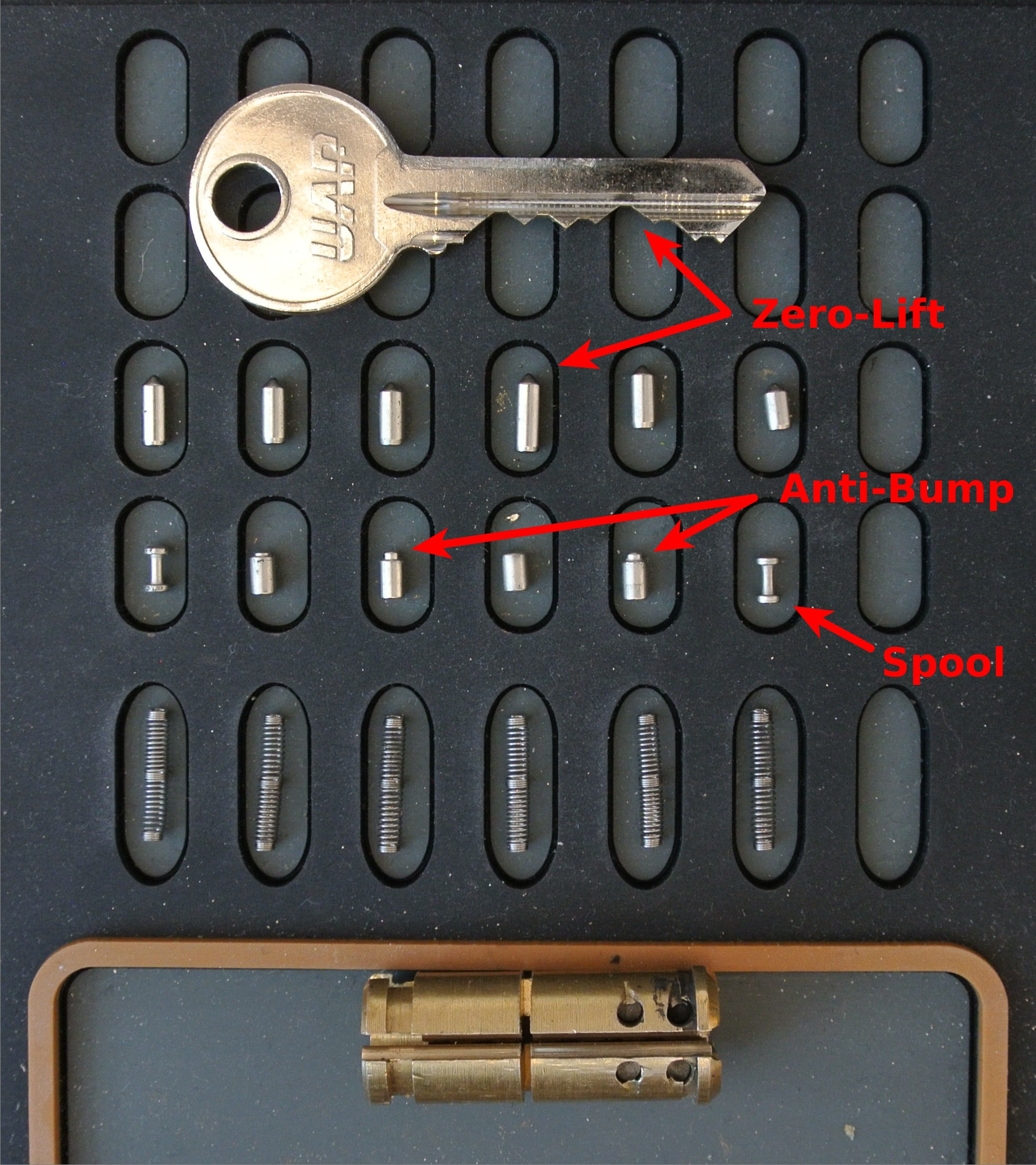 As we can see, we have two extreme spools that cause a fair amount of rotation when engaged. In addition, we have these pins with a thinner part on the top that can pop back into the core when setting spools, making the process of picking even longer. Even with that knowledge and a lot of skill, it still takes me up to a few minutes to open the lock (and burglars are not experienced lock pickers in my opinion). We also notice that one key pin is extremely long and in fact doesn’t require any lifting (hence the name ZeroLift): 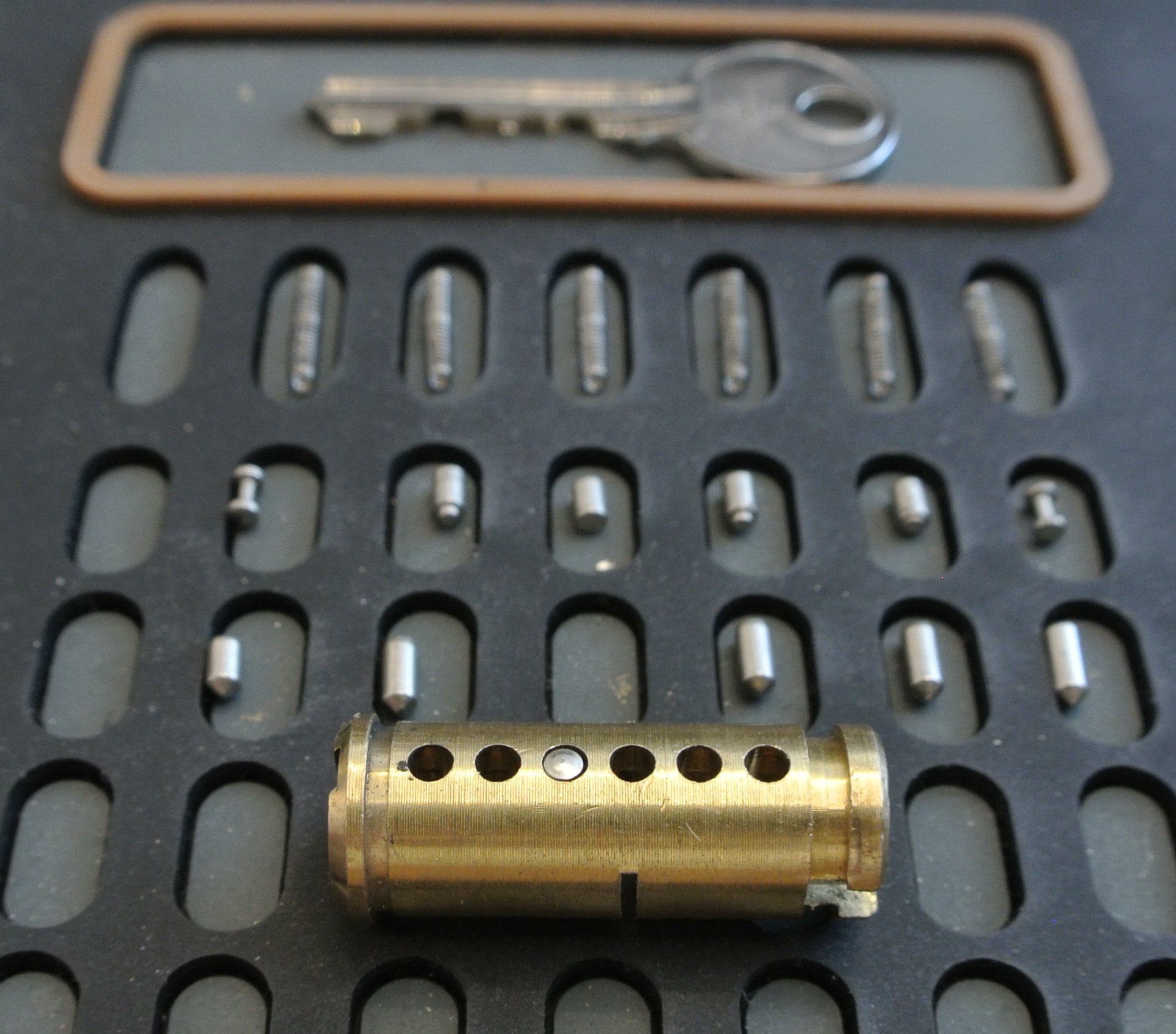 According to the patents, this pin was mainly introduced to make bumping harder (see below), but it also effectively prevents novice raking attacks: During raking, it is highly likely that you touch the ZeroLift pin and overlift it, keeping the lock closed. Raking is one of the more likely picking methods used by a burglar (although even that is rare), so defending against that is very useful.

Next we will take a look at bumping this cylinder. As we previously described, this system always has one pin with the maximum length. Assuming that we cut down a bump key from an existing key, keeping the cut angle and spacings and going a little deeper than the deepest cut, we likely end up with a bump key that looks like this:

I measured the distances (cut height, pin spacing, etc.) from the key and estimated the cut angle carefully, since I did not have technical specifications available that gives me this data. Therefore, the picture might not be 100% accurate. However, it is clear that with these specifications, the ramps of the bump key are quite small and therefore will only engage the pins slightly. That makes bumping harder because less energy can be transferred to the pins. However, this doesn’t prevent bumping because we can simply adjust the specifications a little: By making the cut angle (a little) steeper, you can already make the ramps longer and therefore improve the bump key. The same holds for reducing the cut space a little (some bump keys even work better when doing this).

However, looking at the pins, even a modified bump key will probably not open this look very easily. The pins with the thin end on top can re-enter the core even after some rotation which can help preventing the bump key from opening.

Overall I believe that it should be possible to make working bump keys for this lock, but that they won’t work so easily. For me, that qualifies as bump resistant and maybe I will try to make a bump key for this lock in the future.

While I typically don’t deal with destructive methods, I still wanted to take a quick look at the cylinder design to prevent these attacks.

As we can see, on the following pictures, there are multiple anti-drill and anti-snap features in the core and housing: 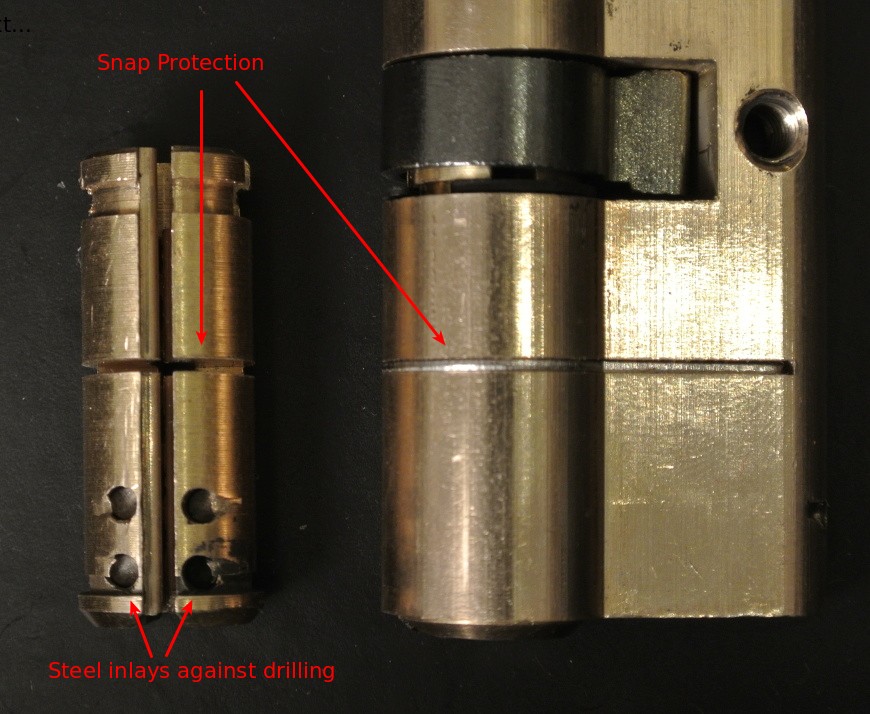 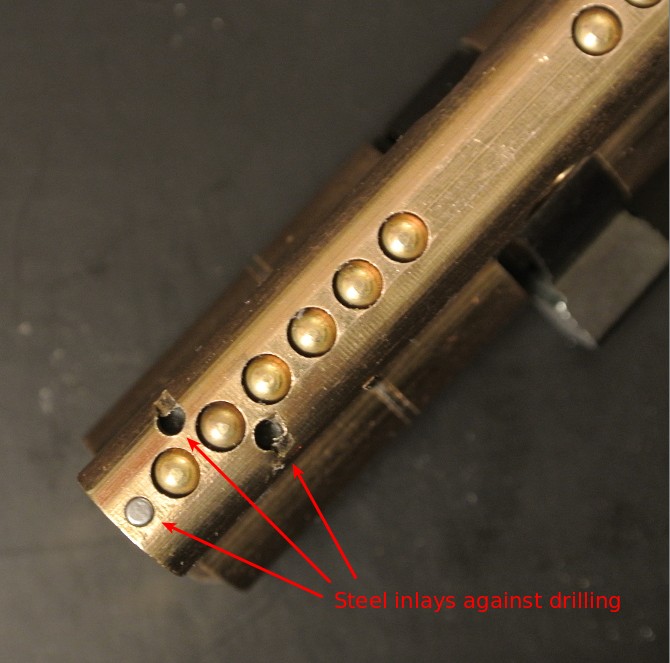 The anti-snap feature is a predetermined breaking point. If you try to break the cylinder using the common methods, it will break around the fourth pin hole and not in the middle as required for a successful opening.

Overall, these features look solid to me and the cylinder has a 1-star KiteMark on it, which means that the resistance against destructive entry has been validated independently.

While it’s hard to make cylinders more resistant to the E-Pick without making them expensive, I think that UAP should consider securing their product somehow against that kind of attack as well.

So, dear UAP: You could make this product the perfect low-budget solution if you manage to fix this :)

Summarizing, the UAP+ ZeroLift is a 6-pin, 1-star KiteMark cylinder resistant to

for the price of only 12.49 GBP (around 17 EUR / 19 USD). For the same amount of money, you can hardly get anything else on the market that has the same defensive capabilities. If you have little money to invest, you are trying to protect only against regular burglary attempts and you don’t need advanced things like copy-protected keys, master key systems and such, then buying this cylinder doesn’t seem like a bad idea to me. Of course, a cylinder at this price has limits and the general disclaimers apply: The value of the assets you are trying to protect and the risk of theft should match your cylinder and door/door furniture choice.

But in general, I like the idea of having a low-priced cylinder for the masses that still provides a certain level of protection for the most common attacks and I think UAP has already done a reasonably good job here.