The KESO series of dimple locks is a well known and (in Europe) very commonly used high security cylinder series that provides not only a high amount of pick resistance but is also outstanding in terms of resistance if offers against destruction (optional pulling protection, full steel housing, etc.). It is well known that these locks can be picked though, although it requires a fair amount of skill and is also somewhat depending on the state and pinning of the lock.

It is also not new that turning these locks by 90 degrees when picked can destroy them, because most of these cylinders have their keyway open at the bottom, such that one row of the side pins will fall into the keyway (key pins, drivers and springs), if not held back by a key. Some other models have a thin piece of metal at the bottom, covering the keyway opening. While this would pose a problem when trying to turn such a lock by 360 degrees to unlock a door, it is not unsolvable. A custom made tension wrench or a key, cut in half, can help overcoming this difficulty.

However, recently I’ve found a far more troubling problem with picking some KESOs.

I decided to pick a KESO cylinder I had in my collection, that had its keyway closed at the bottom. So in theory, even if I turn 360 degrees, nothing bad should happen. It took a while but I successfully picked it, and turned it 90 degrees. Before reaching the 90 degrees, I already noticed that the core was starting to provide more resistance when turning. On positions 90, 180 and 270 degrees I had to repick only 1-2 pins each time (in fact, many KESOs I tried don’t have overlapping dimples at all and can be turned 360 degrees without relocking). However, the core was getting harder and harder to turn, until I finally got the 360 degrees and closed it. But the core was still very hard to move, and I was puzzled about what could have happened.

Since I had no key and picking it again was not an option given the amount of force required to turn the plug, I decided to dissect the cylinder forcefully with the help of a friend. We made three cuts into the housing so we could just remove it carefully, which revealed what happened: On position 2 of the top row pins, the combination of key and driver pin is so short that it fits entirely into the core, leaving space for the spring to also reach into the core. Furthermore, the driver pin is so thin, that picking it while the core has already turned a bit can cause it to “flip” in the housing standing vertically. My guess is that I either picked all the pins and left that one untouched, or I managed to flip that driver pin with the picking. Either way, it lead to the spring being pulled between core and housing, slowly making its way through the metal, causing the core to block.

Here are two pictures of the core when I took it out of the housing: 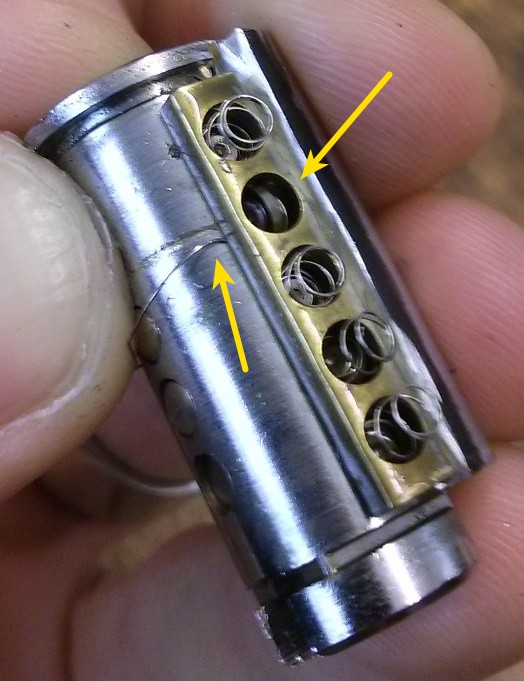 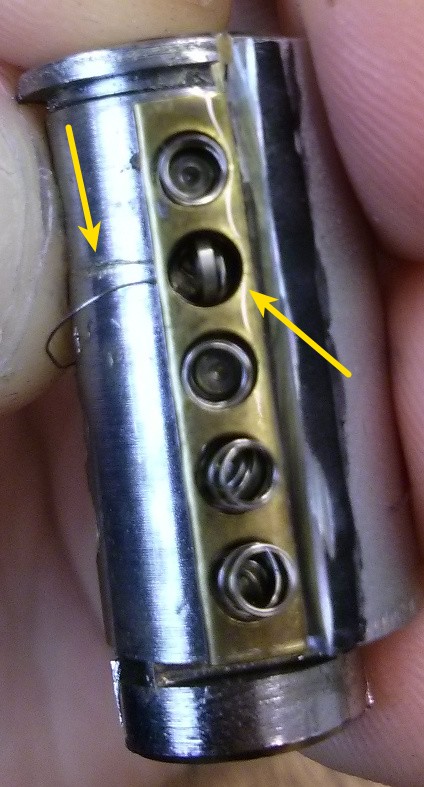 As you can see, the pin on position 2 has turned (and this did not happen while we opened it) and the spring is already jammed up between the core and the bar part containing the driver pins.

Here’s a picture of the key pin together with the driver pin entirely fitting in hole 2 of the core, leaving space for the spring. The broken spring is in front of the core. 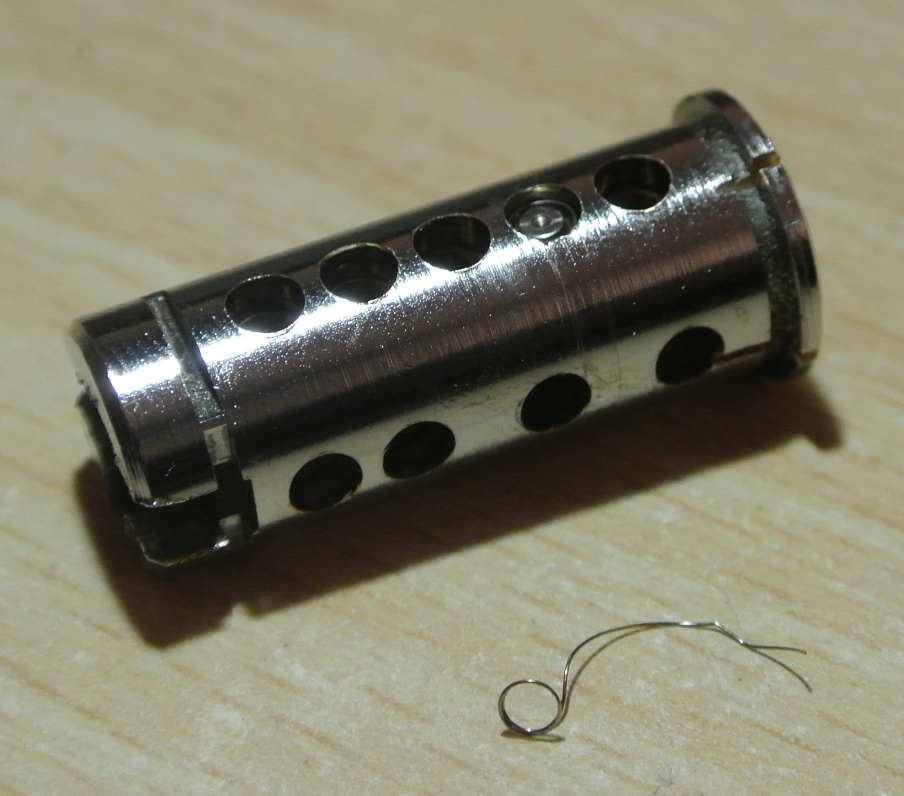 Finally, this is how we dissected the cylinder (all pins already removed for this picture): 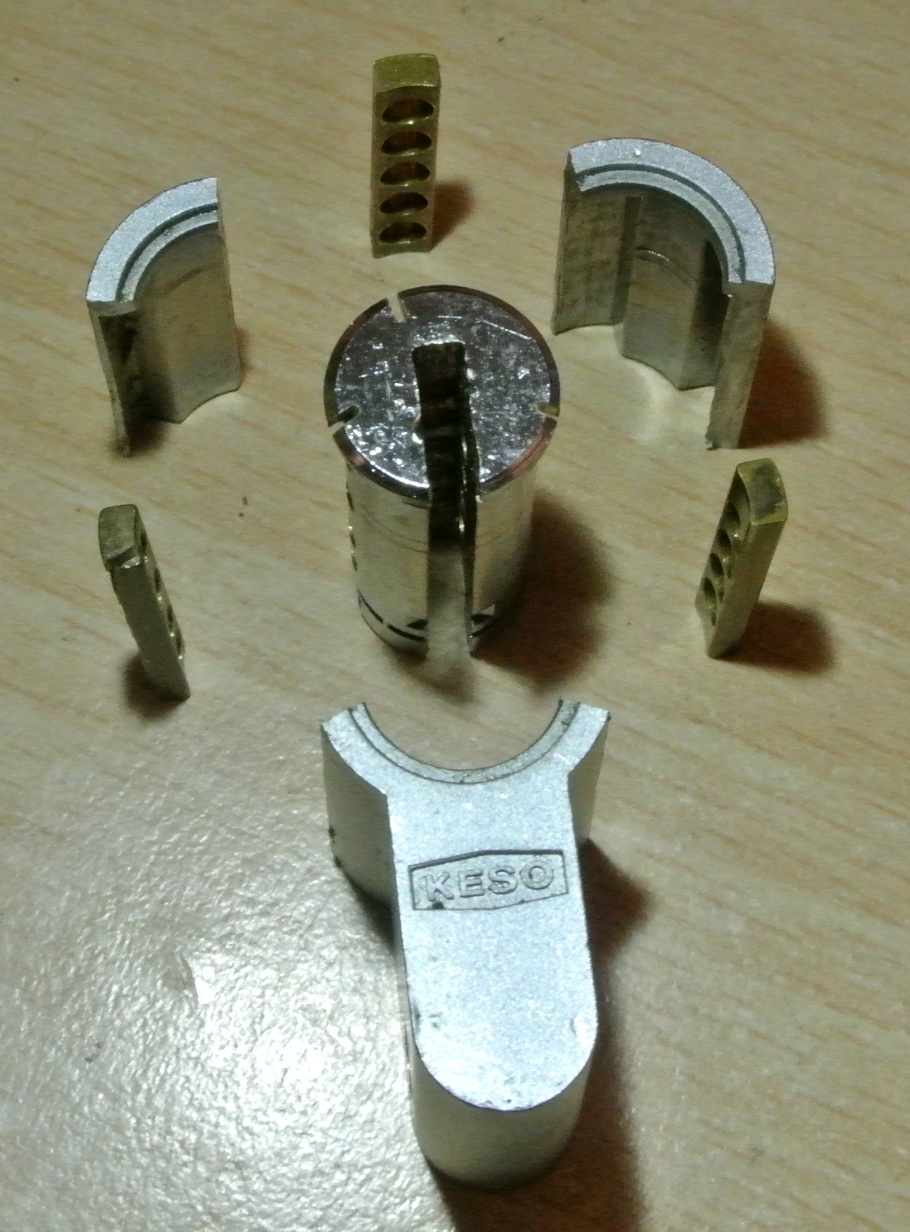 Picking KESO cylinders is possible, but not in a (guaranteed) non-destructive way. While some KESOs behave fine when picked, others might just break as described. Be absolutely careful with picking these, even turning them less than 90 degrees could break them already. I don’t know if this is an intended feature of some KESOs or just bad luck, but for now we can just speculate.